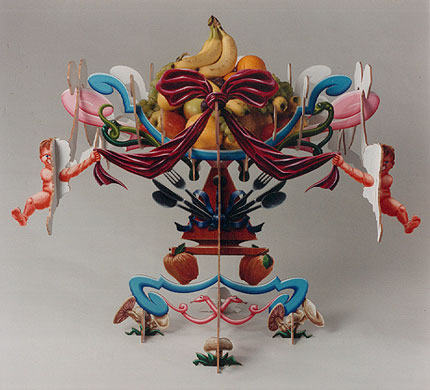 The series “Being beautiful – Fretworks II” consists of a sequence of table centrepieces, which as an ensemble form a room installation similar to a wunderkammer or cabinet of curiosities. The objects vary greatly in size and form. Covering a wide range of purposes from objects of conceivable practical use (Bowl I, Etagère I) to pure works of art (Bowl III, “Plan voisin”), they explore the transitional zone between applied and pure art.

"... Wolf von Waldow’s re-invention of Le Corbusier’s ‘Plan voisin’ […] is an affectionately ironic comment on the rigid high-rise scheme with which the Swiss architect aspired to supplant the centre of Paris. Monastic cells surrounded by figures from a nativity play bearing Bauhaus accessories, constructed in colourful fretwork, act as an invitation to contemplatively assess the relationship between megalomania and conviviality.”

"... The large work ‘Home’ was installed in the middle of a church in Copenhagen. It was an apposite context for the allegorical pavilion crowned by an eagle and filled with images made or found by the artist, ranging from fertility to transience. Is this not indeed a complex allegory about the tragic tribulations of life? While a living room wall inside the pavilion serves to distil the brief history of one’s own life in souvenirs and photographs, allowing the viewer to deliberate all these trophies and idylls as if seated on a throne, outside soldiers labour in heroic toil unto death. They cast out nets in an endeavour to catch the meaning of life and momentous world events. And yet, as history repeatedly shows, they will each and individually plummet and ossify into sculptural busts adorning facades, no more than décor for the embellishment of transient, grand ideas of state. From this perspective the rather jocular showpiece is transformed into a small model of the world.”