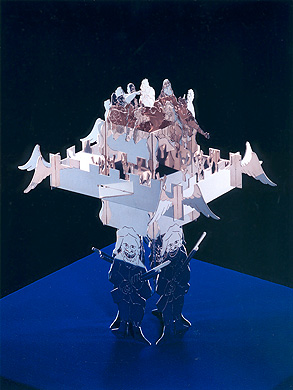 These works arose from my interest in medieval monstrances and reliquaries. Many incorporate architectural elements which, matching their transcendental themes, largely disregard all constructional considerations. In this respect, I consider them architectural fantasies. By the same token, these works are also a play on small-scale sculpture, which is currently somewhat neglected. Besides this, they also of course operate as models for larger-scale metal objects (cf. object above the counter in the Bar Hotel Royal Meridien, shown in the section “Kunst am Bau/Art for Buildings”).

The objects are made by slotting together various laser-cut elements of stainless steel, which have been highly polished. Their reflections create an almost glassy, immaterial impression, opening up constantly shifting spatial configurations on the interlocked surfaces.

“... Wolf von Waldow’s sculptures barely conceal his penchant for the art historical profusion of narrative loquaciousness. They also abound with all kinds of detail, thematic associations and heightened individual elements. But the artist abandons his art historical role models as soon as his interest in ornamental narrative shifts towards the present day. Whatever the objects he chooses to combine or correlate in his sculptures, he seldom shows old or out-dated motifs. Instead, we encounter mobile phones, the logo of the Deutsche Bank, fashionable hairstyles or a DJ. Alongside them, enduring symbols such as the Star of David, the crescent, the crucifix or the communist red star are assembled into a kind of wind wheel constantly turning on its own axis. Elsewhere, Wolf von Waldow takes popular motifs and inverts their meaning, as in the figure of the clown or the sailor’s anchor, whose lateral axes he models into hands with pointing fingers, or the German symbol of the oak leaf seen sprouting out of aerials with human ears. The sculptures’ most conspicuous feature, however, is the skill with which the artist develops sequences, series and repetition. This makes many of his works seem like excerpts, samples extracted from a sheer endless cosmos built from consistently identical components. ...”