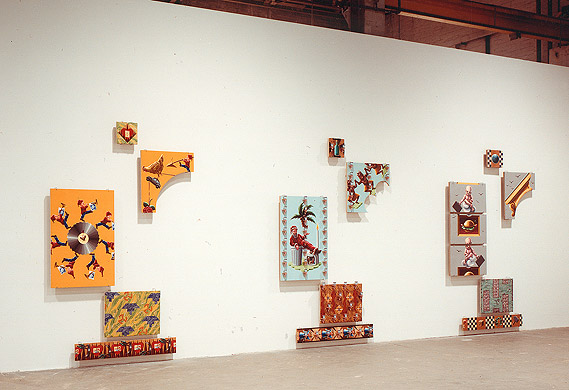 The series called “The Amber Room” was inspired by baroque wall décor. Each work is composed of several individual elements (picture panels, sections of frame, moulding, panelling, etc.). They consist of emblematic and ornamental motifs arranged in loosely associative and not necessarily logical correspondence to one another, thereby creating an open ensemble.

The various panels are fixed at a slight distance from the wall, as though fragments or samples that could be extended to form a more comprehensive system. Individual components are executed in different techniques traditionally used for room decoration. Some of these are now no longer considered “art”, as for example marquetry and intarsia, verre eglomisé pictures and scagliola marbling.

"The five-part tableau ‘Amber Room, part 6’, divided into a two-colour arrangement similar to the corridors of an old government buildings, is also an assembly of numerous parallel narratives. The work evolved from a visit the artist made one summer to Auschwitz, which fifty years on has become overlayered with so much else that the former terror of the site has now been largely obscured. Thus, in this anti-illusionistic work Wolf von Waldow has combined a Bible quotation with the neat arrangement of stamps honouring Hitler and the logo of the German job centre (“Arbeitsamt”) to voice a warning about new totalitarian horizons. He has then added an image of the escapist dream of a tropical island, while incorporating associations with the eco movement and nuclear power, and finally garnished the whole thing with the emblem of a misunderstood terrorist revolution. […] Thus the abundance of totalitarian aspirations tips over into a humanist appeal to remain alert to their lethal fallaciousness."