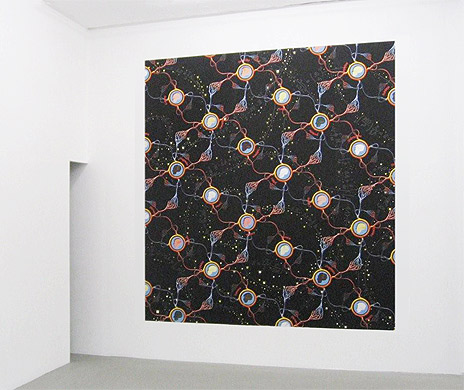 "The work “Völkerkunde” serves well to explore in greater detail how Wolf von Waldow assembles beautiful and altogether disparate elements to construct a cosmic pictorial foil for our existence. The underlying structure draws on Arabic latticed star ornaments which once represented the world’s primordial state of divine harmony in pure mathematical and geometrical form. Large circles in the background are formed from world formulas describing the physical laws of the universe, such as Maxwell’s equations, Heisenberg’s uncertainty principle, the theory of relativity, Newton’s law of gravity and so on. Ranged in front of these on a second level are elements of a religio-metaphysical interpretation of the world. The foreground shows a web of arteries and veins whose points of intersection are heightened by oval medallions. As described in the discursive model postulated by the philosopher Ramon Llull in 1283, these are assigned to the sixteen entities of God: Bonitas, Magnitudo, Aeternitas, Potestas, Sapientia, Voluntas, Virtus, Veritas, Gloria, Perfectio, Justitia, Largitas, Simplicitas, Nobilitas, Misericordia und Dominatio. These medallions also evoke the cosmic order of heavenly spheres, with the earth at its centre and surrounded by water, air and fire. Mankind itself appears in the form of heads depicted in profile quoted from publications of twentieth-century racial (“ethnic”) theory, whereby their classifications – likewise far from being admissible – have also been deliberately muddled."