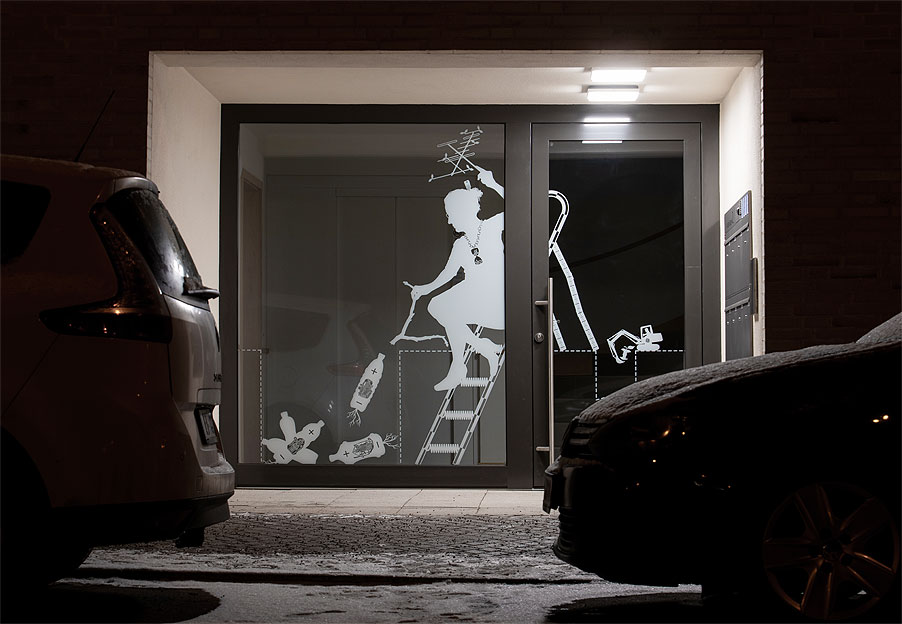 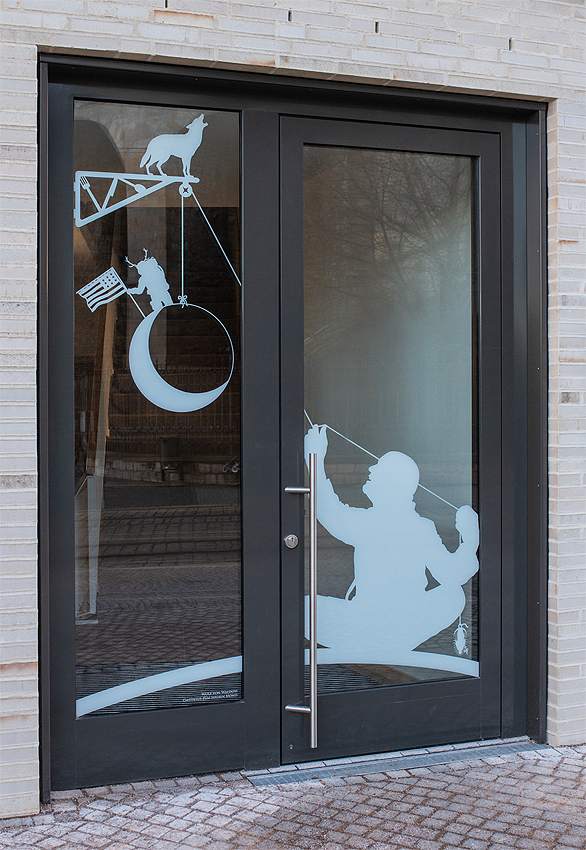 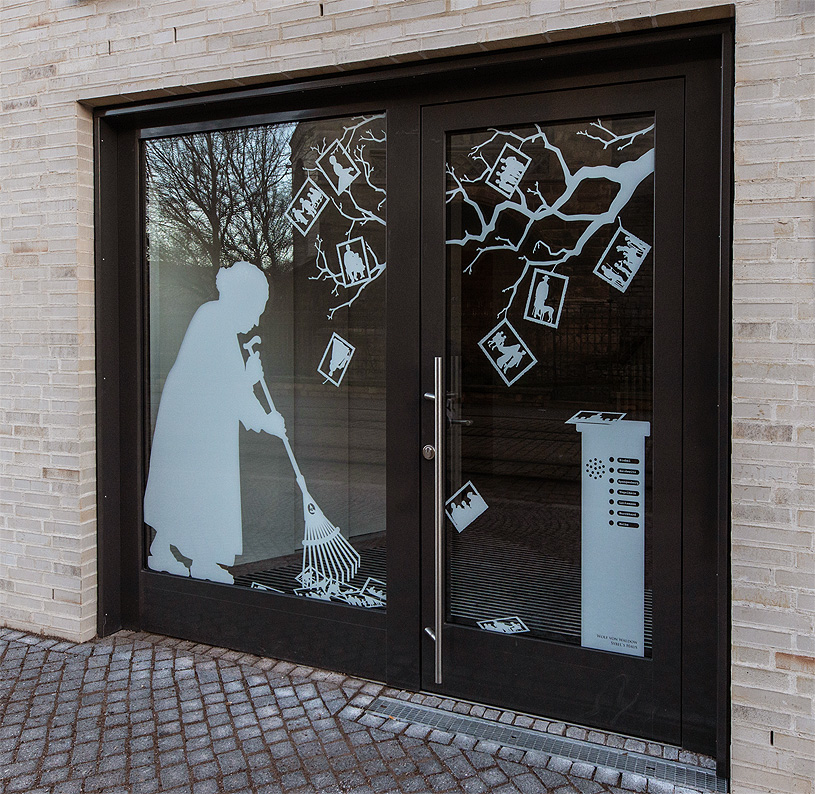 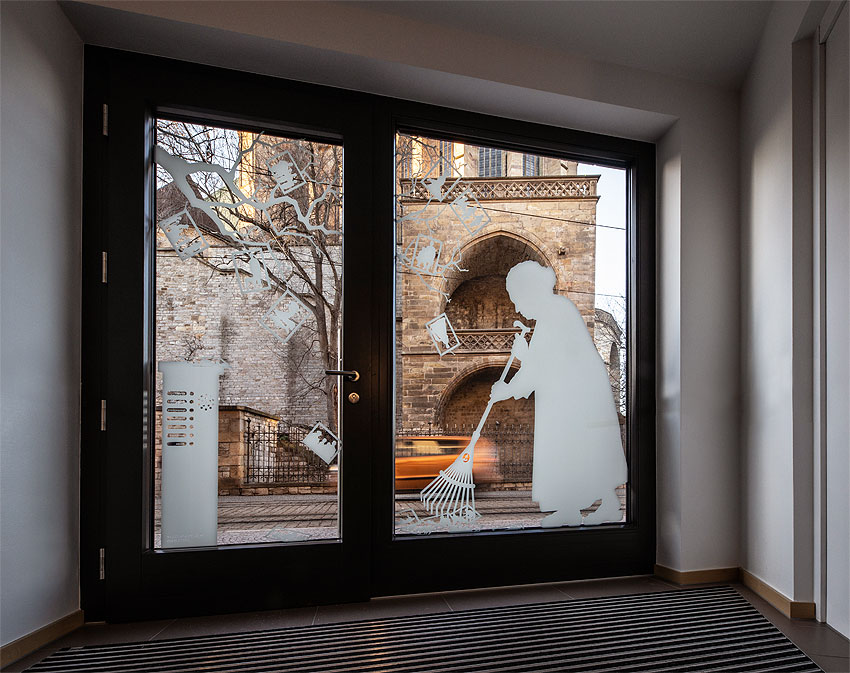 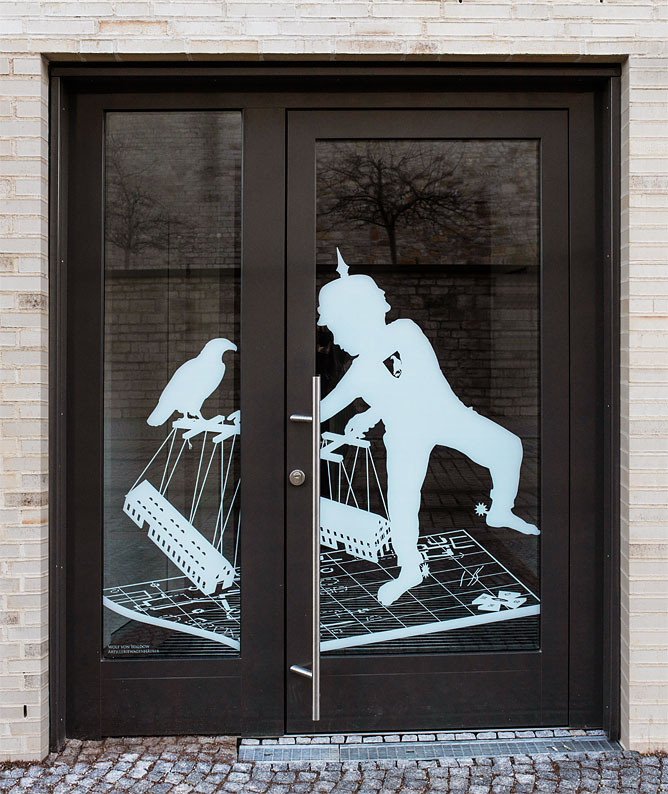 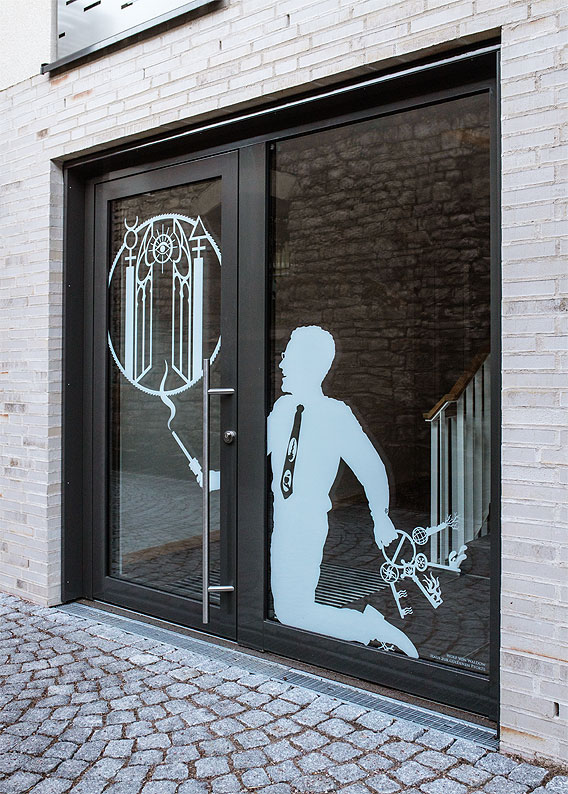 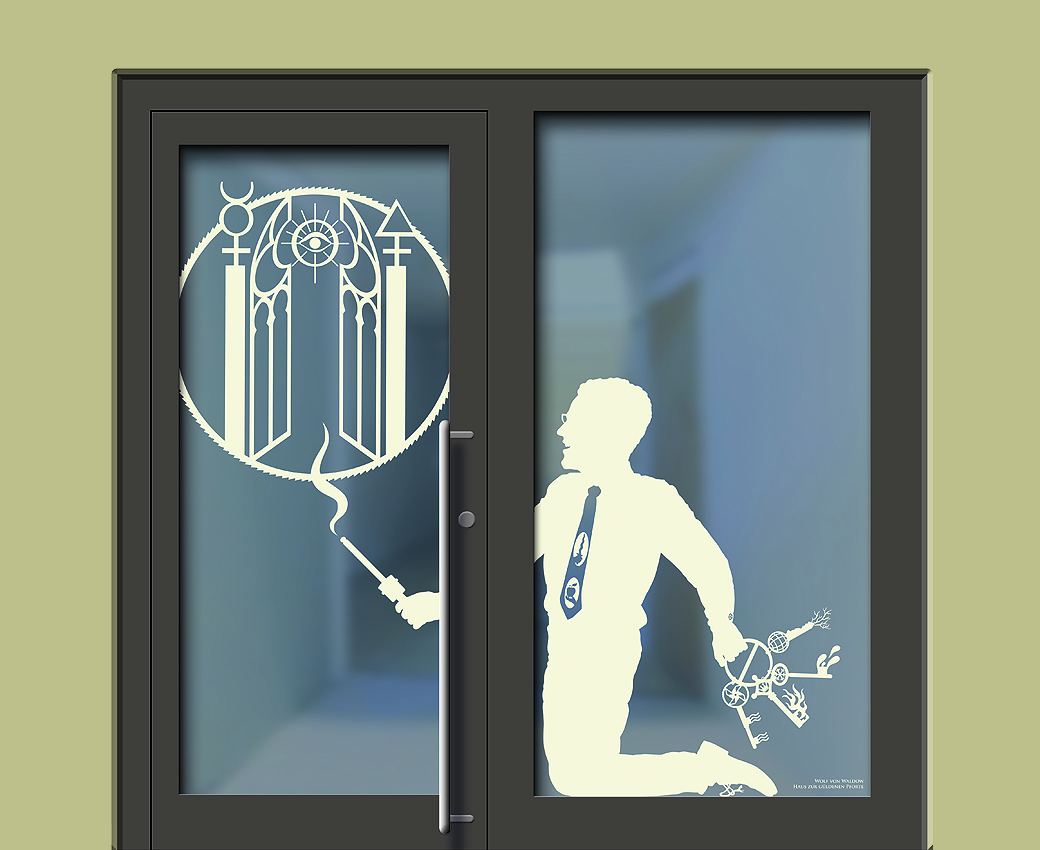 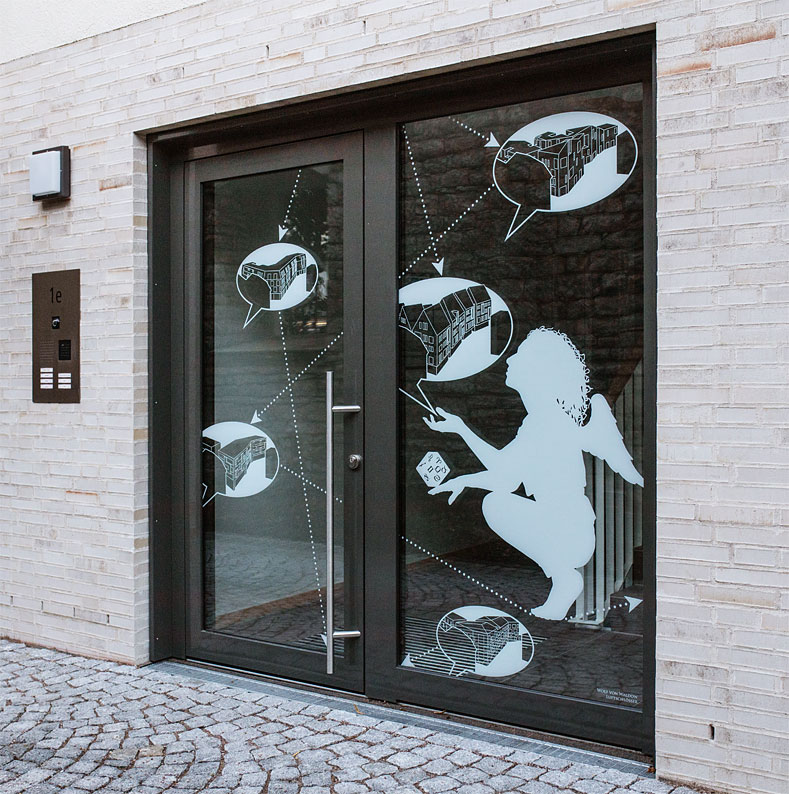 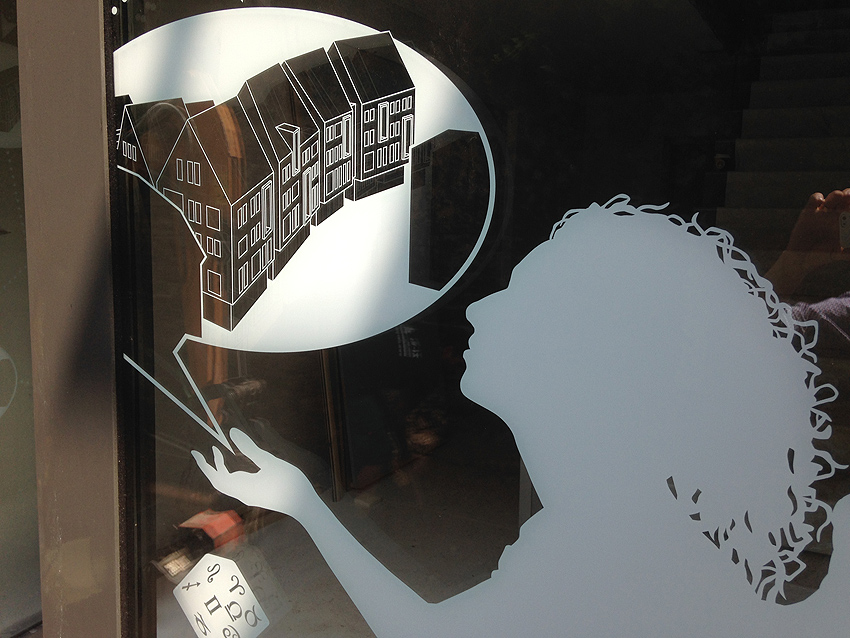 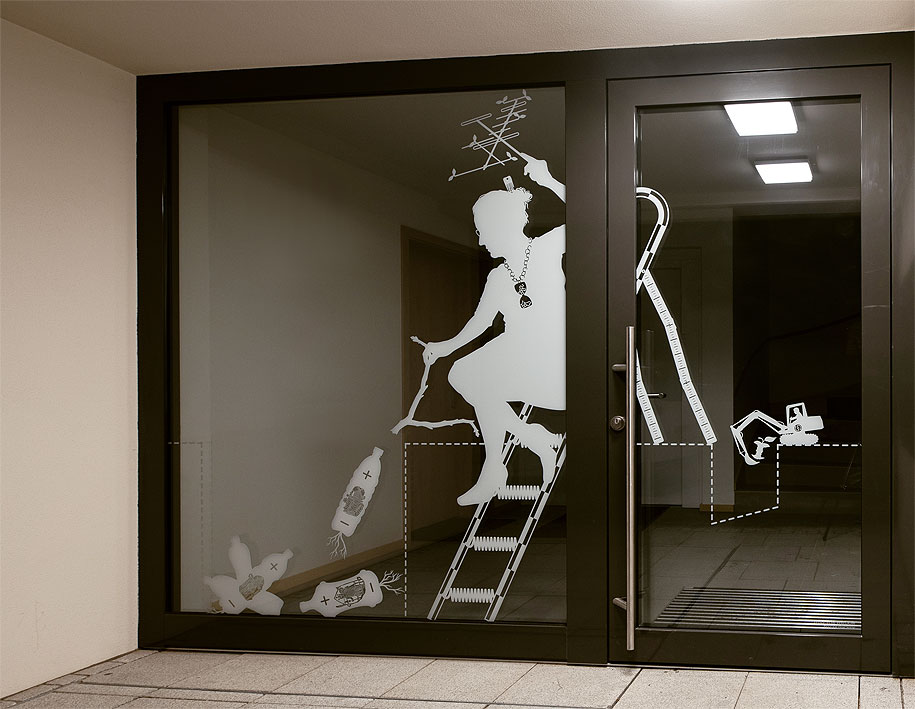 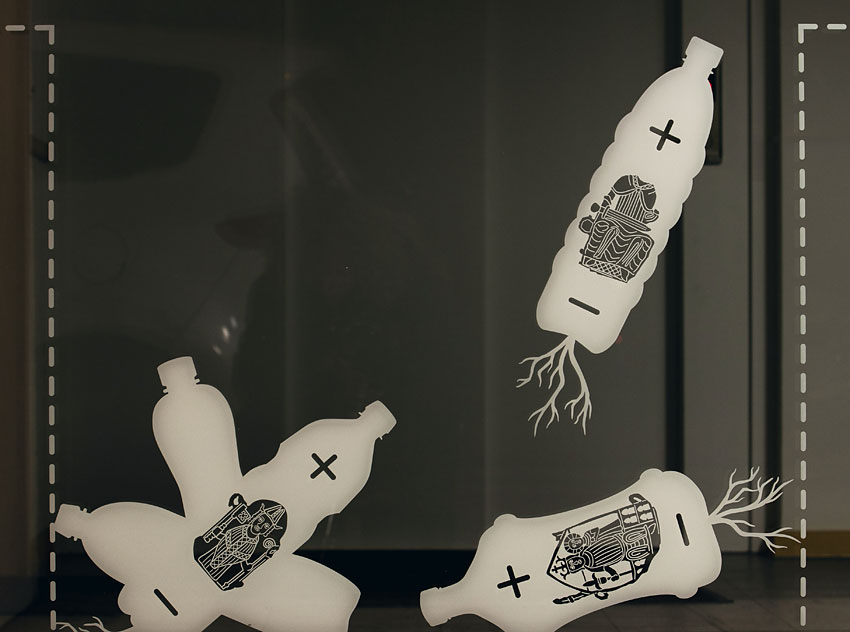 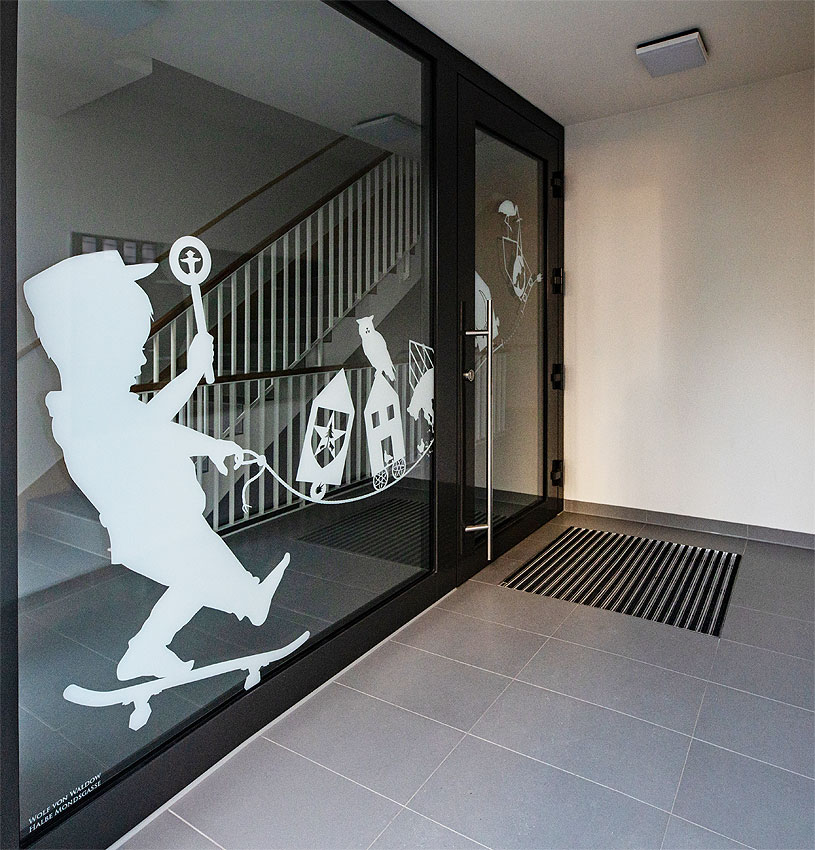 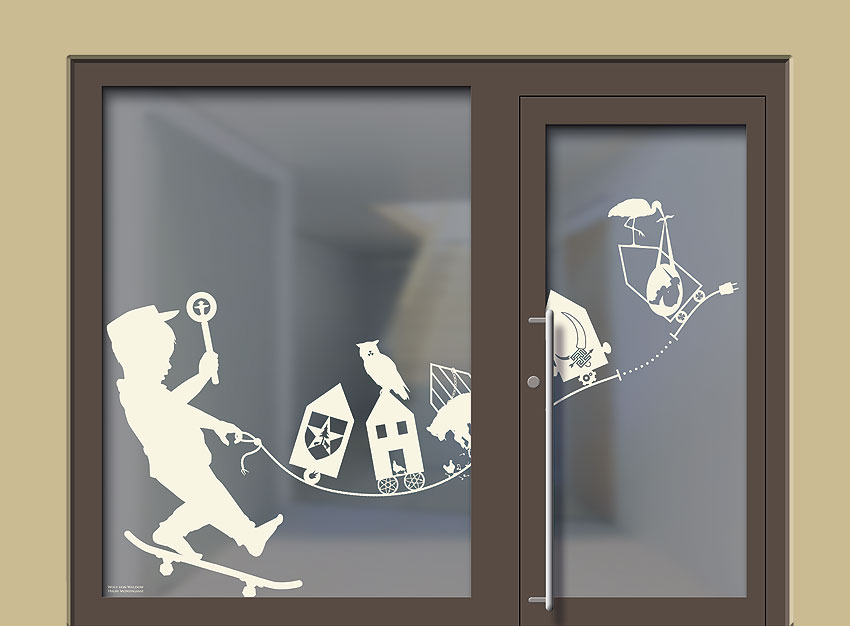 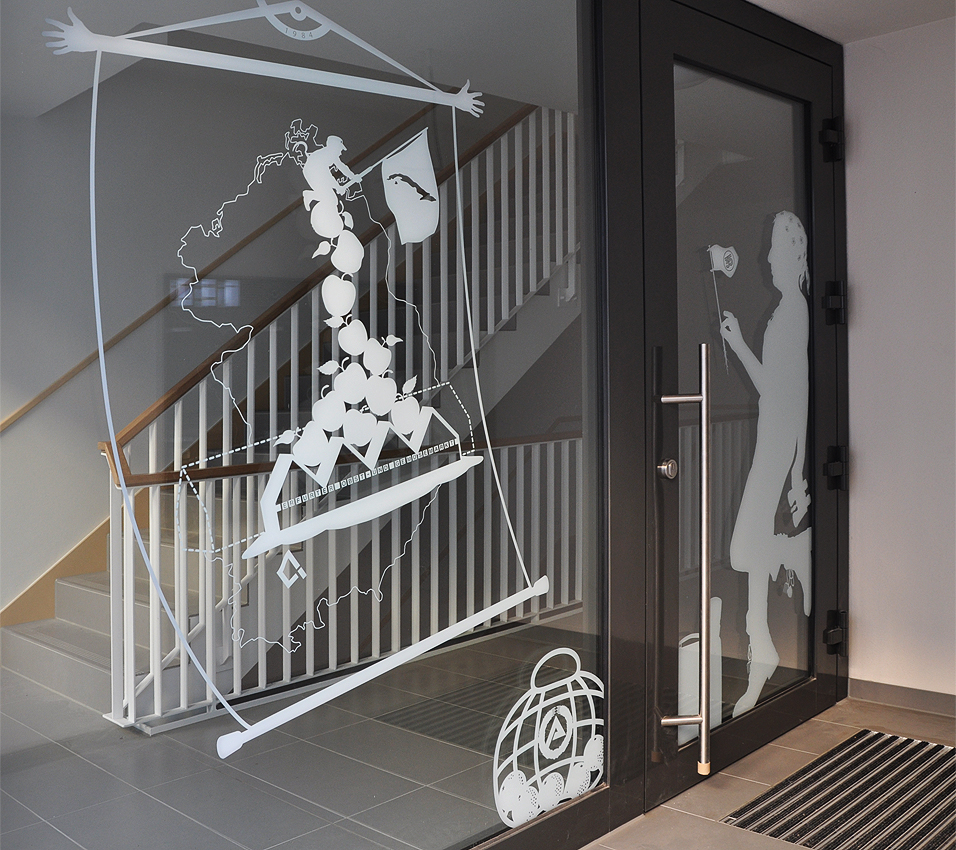 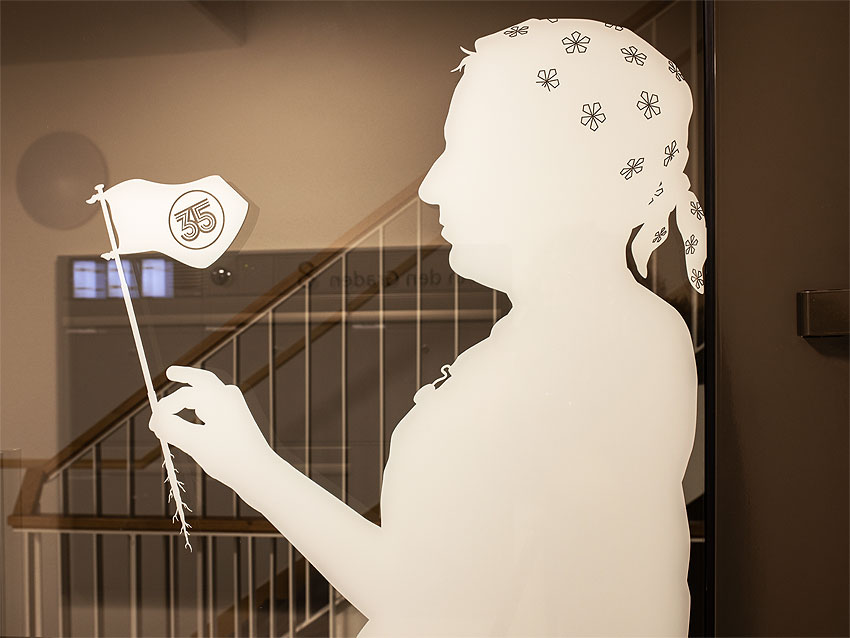 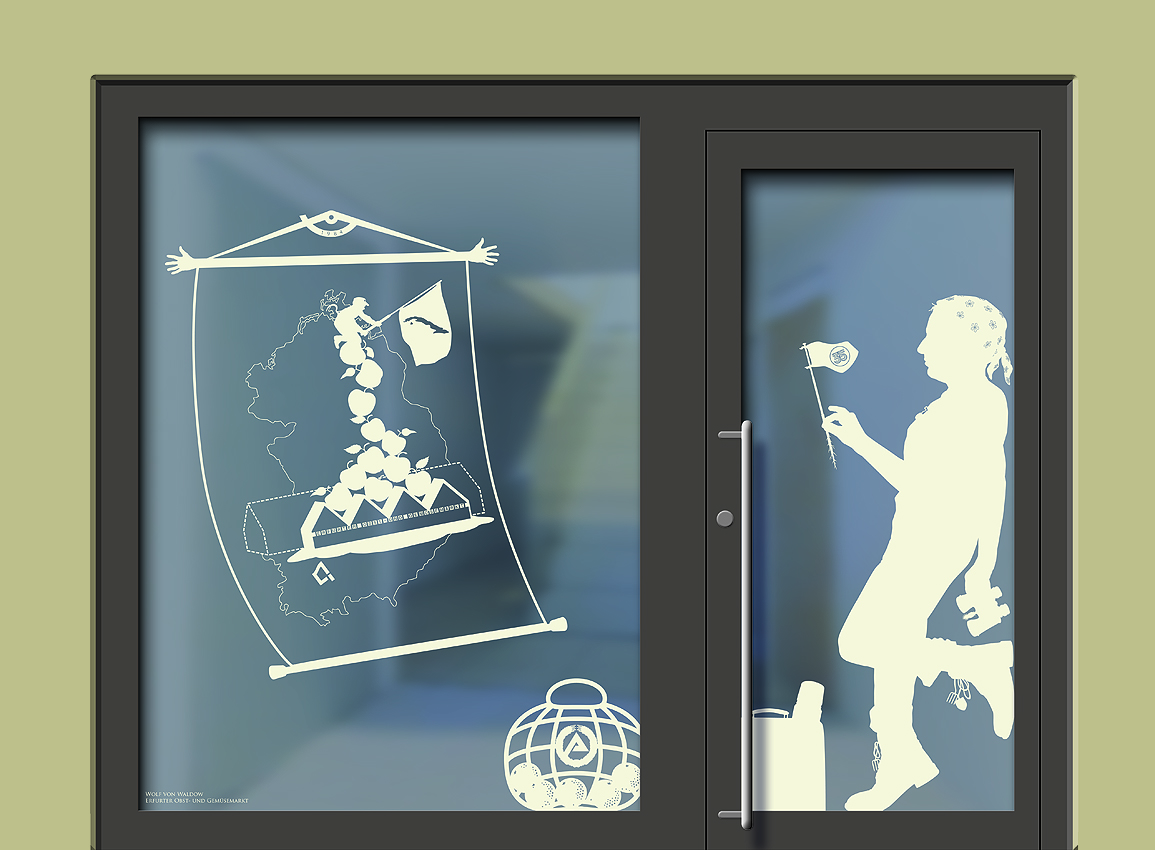 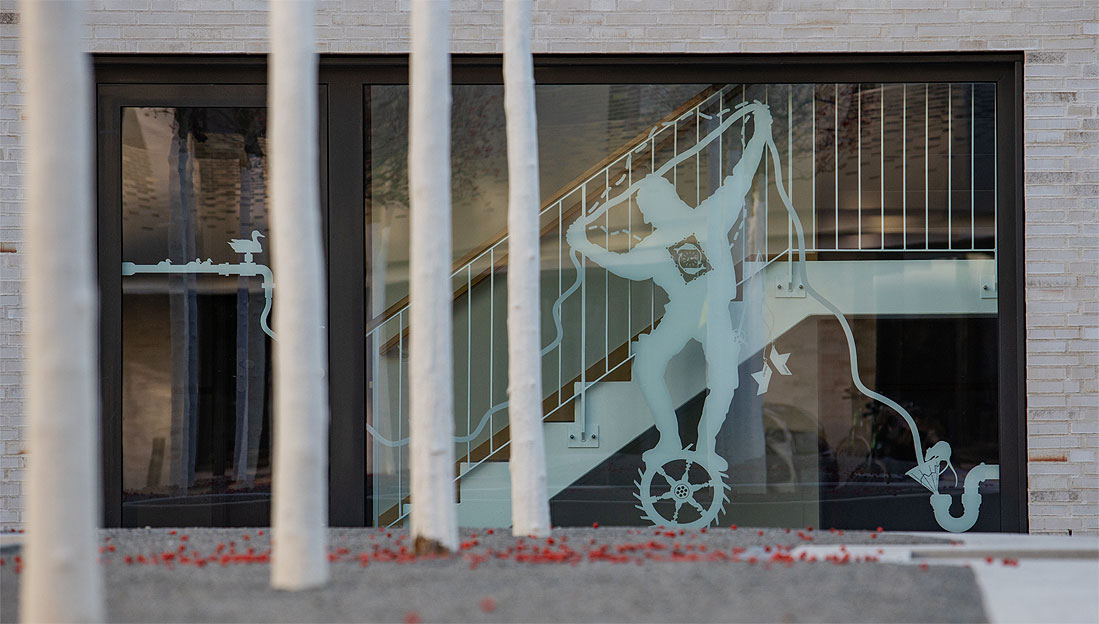 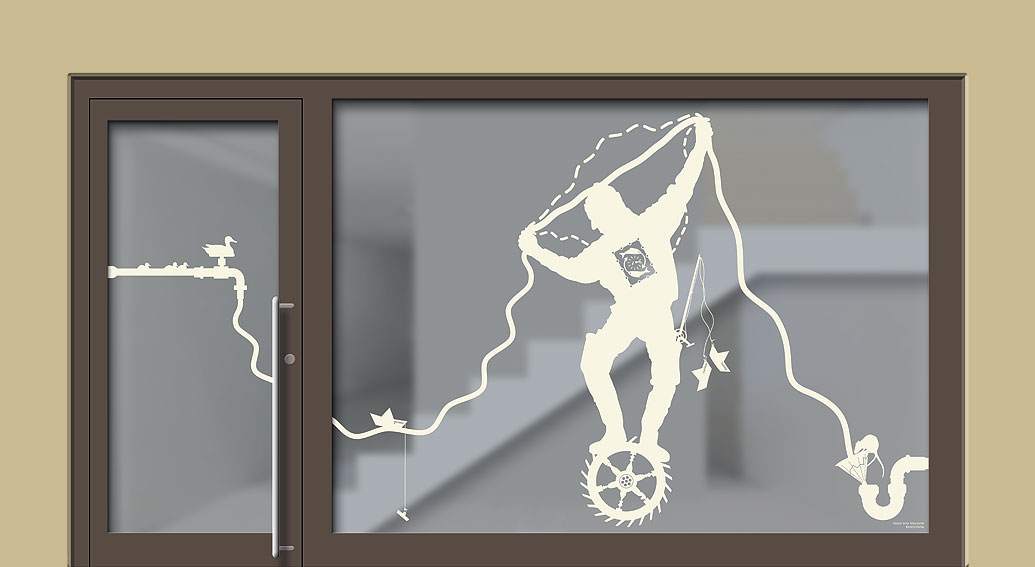 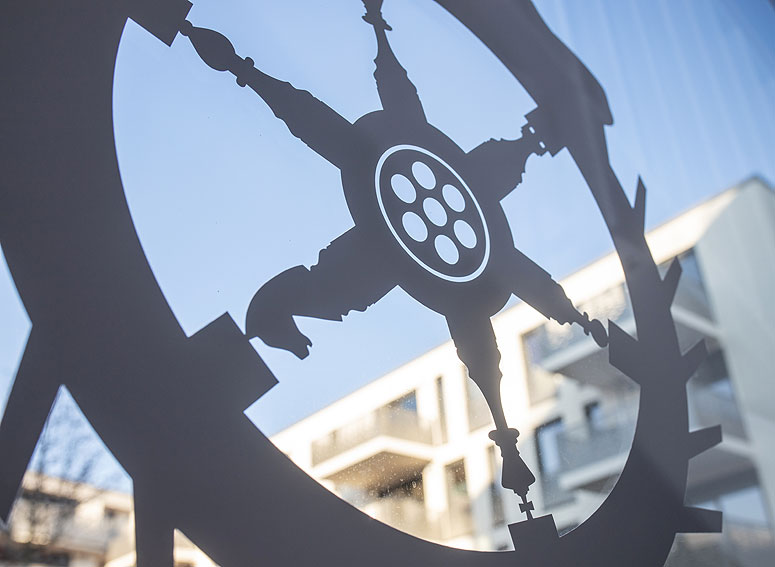 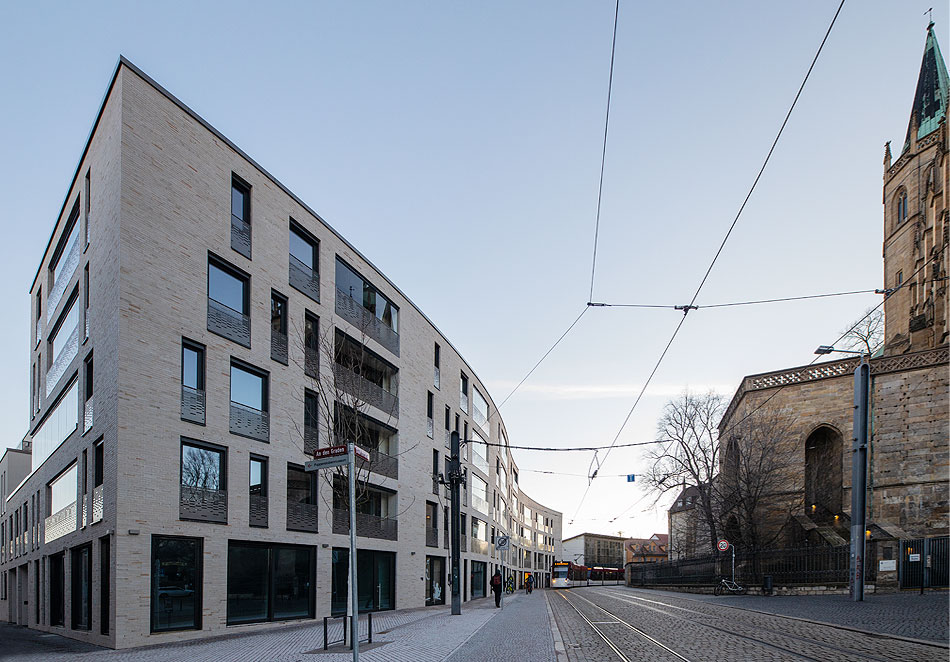 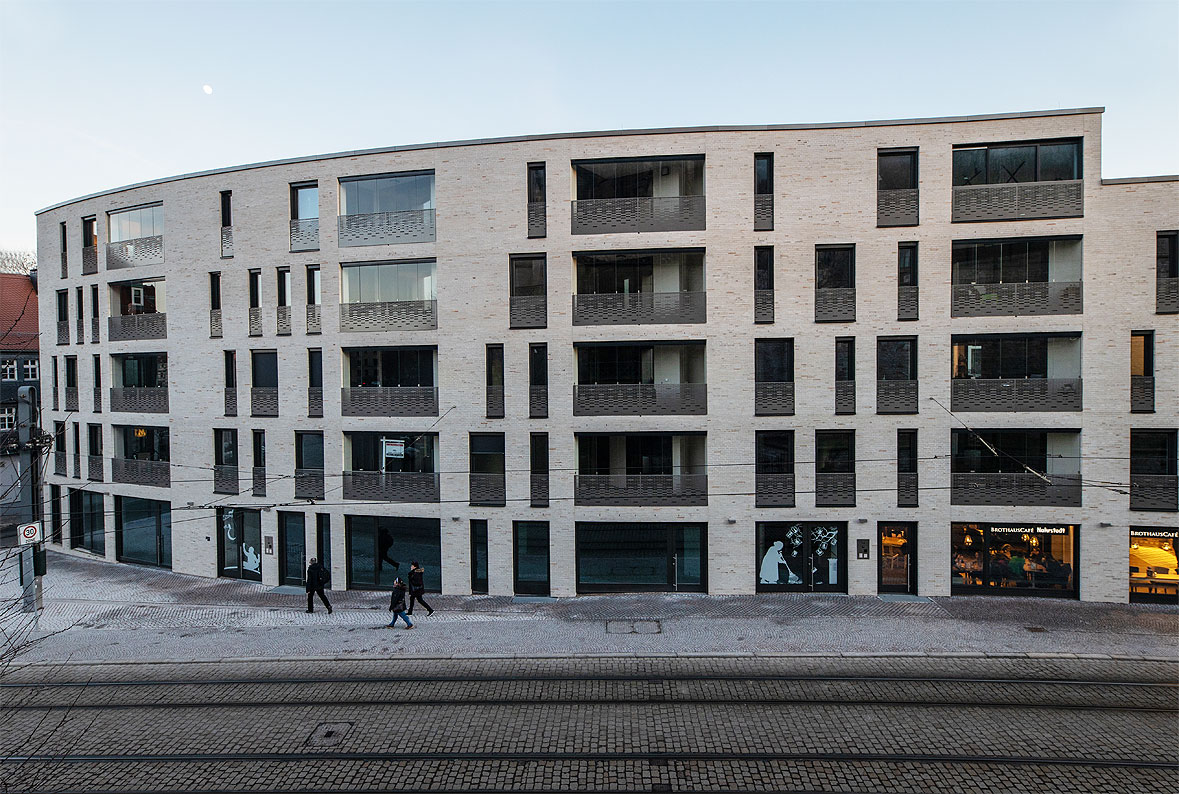 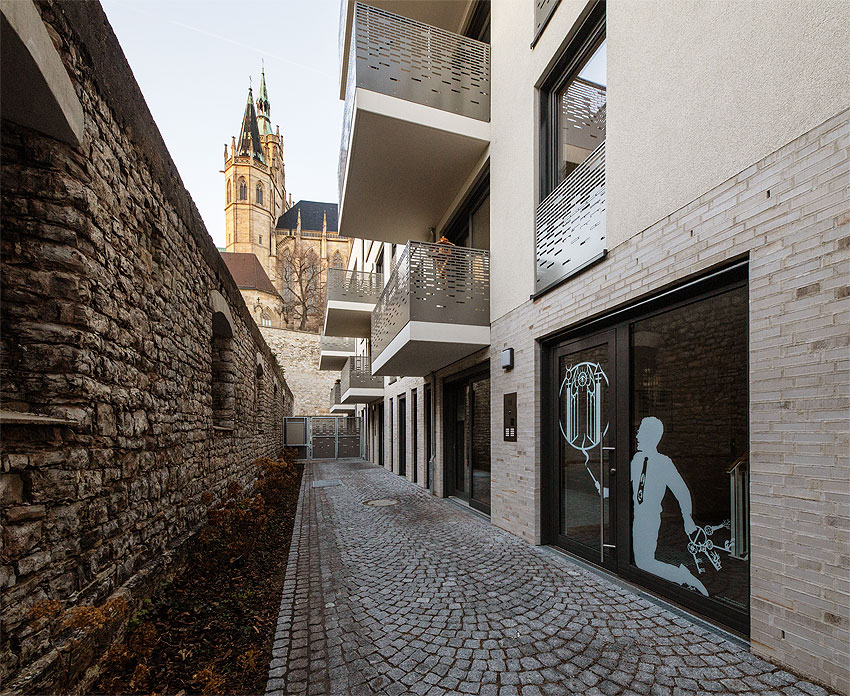 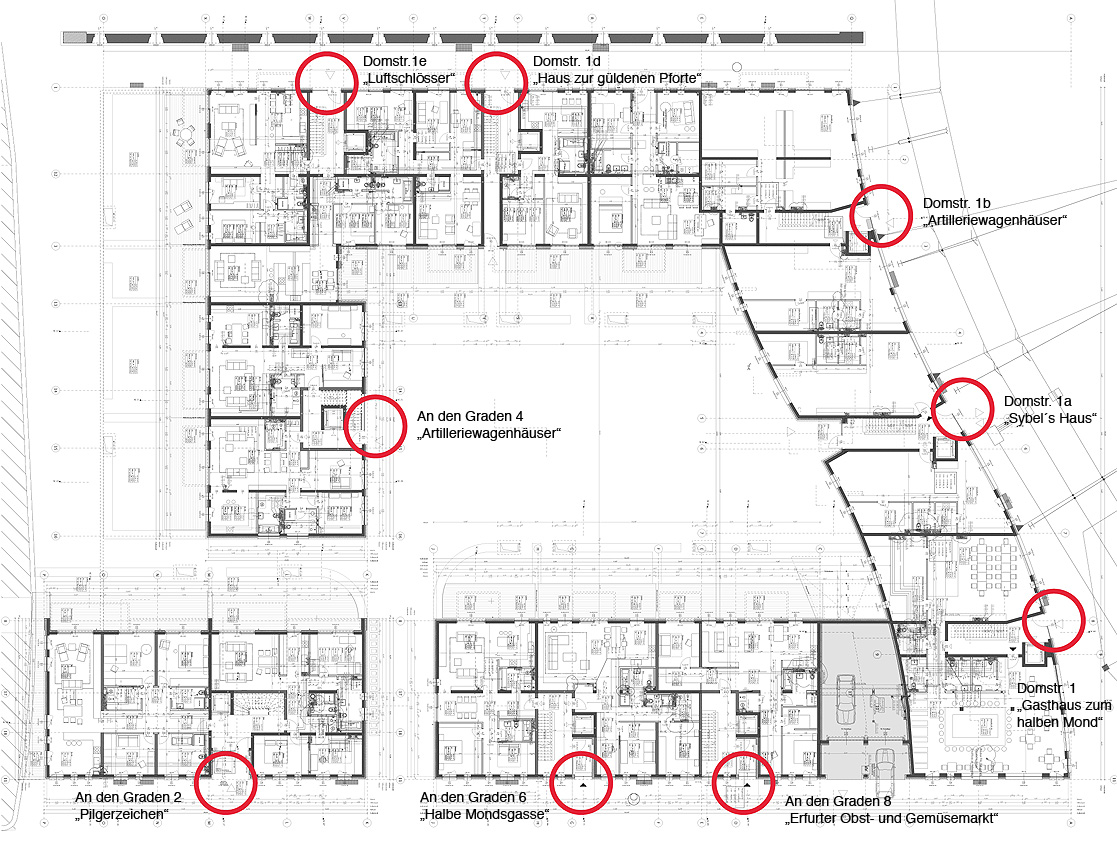 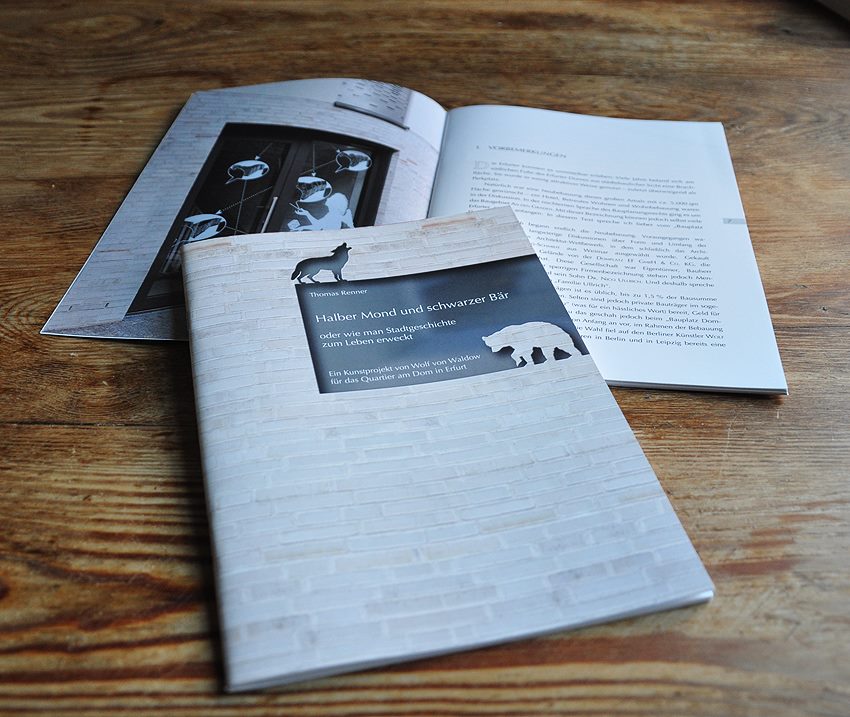 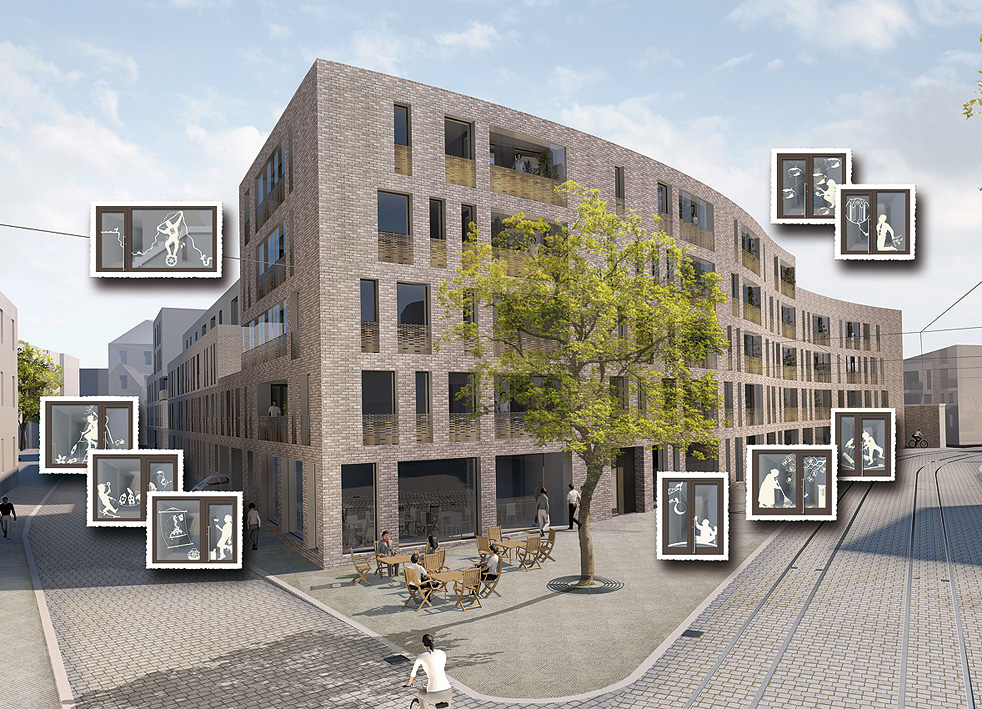 The half moon and the black bear

Entrance doors for a new apartment building at Erfurt, 2016-18

Print with ceramic colors on glas, 2018

About this project a detailed brochure is available: Thomas Renner: Half Moon and Black Bear - or how to bring city history to life. Publshed by Domplatz EF GmbH & Co.KG

The motifs of the 9 entrance doors are inspired by the history of the place. It was originally part of the medieval city, just next to the gothic cathedral and densely populated. But the whole neighborhood was demolished in december 1813 during the recapture of the city from the napoleonic troops. In the middle of the 19th century there were built some arsenal houses by the military to keep their artilleries. They were partly preserved till 2014.

The 1st entrance "Gasthof zum halben Mond" (Inn "The half moon") refers to the inn, which was original located at the corner from the end of the 16th century.

The 2nd entrance "Sybel's Haus", reminds on all the forgotten people and their memories living here for generations. Karl anton Sybel is mentioned in a diary from december 17th, 1813, which describes the demolition of the whole quarter. At the billboard there are more names of last owners before pulling down their houses.

The 3rd entrance "Artilleriehäuser" refers to the artillery houses, built in 1845 and 1863 by the Prussian army. Locals called them "Kanonenschuppen". I combined it with the map of the archeological excavations, which were done in 2016 before the erection of the new apartment house. Because the ground had been thoroughly leveled in the 19th century, only fragments of some medieval basements were found.

The 4th entrance "Haus zur güldenen Pforte". In medieval towns, all the houses had names, not numbers. In Erfurt this tradition is still alive. So I looked for the handed down names of the place. One was called "Zur güldenen Pforte" (The golden gate). As I didn't want to use any color I looked for a possibility to describe "gold"… and ended up at alchemistic signs and symbols. To make gold you need sulfur, mercury, the 4 elements, salt - and of course the philosophers stone (Stein der Weisen) to be successful.

The 5th entrance "Bergstrom". Through the city of Erfurt several arms of the river Gera flow. The one which runs behind the building site is called "Bergstrom". Over time it changed often its course and crossed the site at different places. The water was used to keep watermills running. The wheel and the running water reminded me on fortunes wheel and so I made something about that.

The 6th entrance "Erfurter Obst- und Gemüsemarkt" (fruits and vegetables market Erfurt). The government of the DDR established a vegetable- and fruit market in one of the former artillery houses, on the occasion of the 35th anniversary of the DDR. This was something remarkable, because vegetables were regularly sold at the normal supermarkets. Special fruit markets did rarely not exist in the DDR. So it was a political attempt to appease the people dissatisfied with the general supply situation. For me as a "Wessi", It was not easy to develop a motive concerning the DDR history.

The 7th entrance "Pilgerzeichen" (pilgrim signs). Here the focus is on the artifacts found during the archaeological researches. Highlights are three pilgrim signs from Maastricht and Aachen from about 1300. They were used as applications, for example on cloths and were found in a garbage disposal (latrine). In another place they found a bones carver workshop with lots of broken combs.

The 8th entrance: "Halbe Mondsgasse". The present street "An den Graden" was formerly called "Halbe Mondsgasse", after the name of the inn at the corner Domstraße. During my research I found out the charming names of all the ancient houses in this lane, like "Zum schwarzen Bären" (the black bear), "Zum roten Stern und zur grünen Tanne" (red star and green fir tree) or "Haus zum großen und zum kleinen Störchen" (tall and short stork). The form of the houses refer to the schematic way houses are presented in old city views.

The 9th entrance: "Luftschösser" (castles in the air). After so many motifs inspired by the history of the place, I decided to make something about the future, or how it could have been. The now erected apartment building was chosen in a competition from 20 other projects. So I show some of the rejected designs.