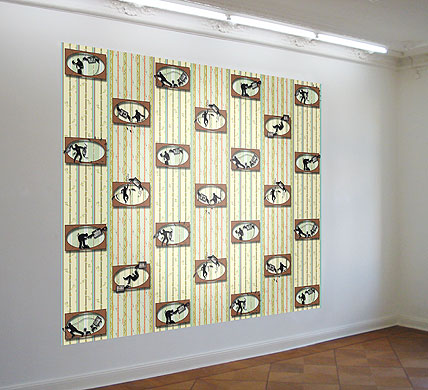 “The edition Wolf von Waldow produced for griffelkunst offers a particularly clear example of how he works. It is the first time he has employed historic photographs, a classical means for conveying memory and history. Each motif consists of an inverted photograph and a silhouette like a paper cutout. As negative images, the photographs are suggestive of fading memories, whereby their tonal inversion to some extent causes them to adopt obverse connotations. One photograph of a wedding shows the bride’s dress and veil in black, making the ceremony feel more like a funeral. A further intriguing contrast happens in the background. Here the artist has manipulated the inserted elements taken from maps, causing the little ‘street villages’ to look like diagrams of electrical circuits and the ‘railway lines’ like computer boards. As viewers, our gaze is constantly lured to follow the various paths as they unravel.”

Stephanie Bunk (excerpt from an essay for the autumn selection of the griffelkunst Vereinigung Hamburg, 2009)