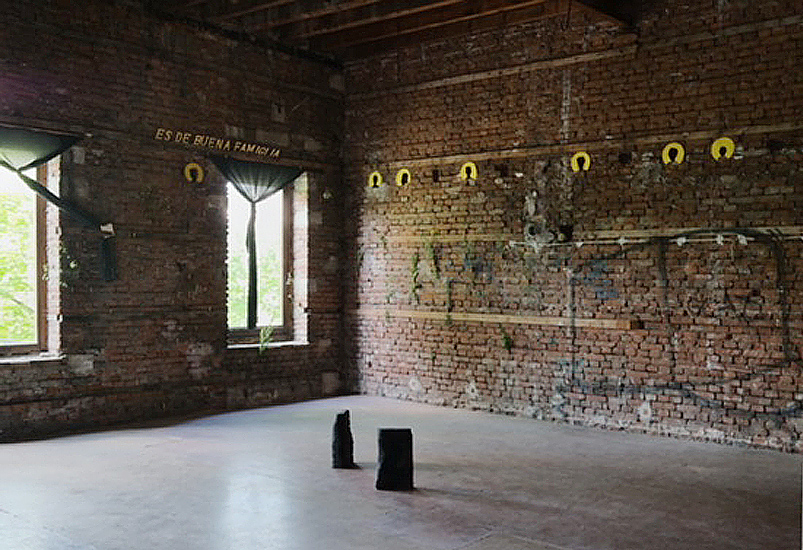 In june 2016 I was invited to Process Space Art Festival in Rousse/Bulgaria, along with 50 other artists from around the world. This installation was created as a part of it. My own work requirement was: "handmade" - so working without using computers or copying machines and only with materials that I could get on the spot.

My workplace was located in the former trading house of the family of Elias Canetti (1905-1994). In his autobiographic book "Die gerettete Zunge" he describes how fascinating this house full of strange goods and odors was for him when he was a child. The work consciously uses the space requirements of the back light between two windows. The small strips of gold paper that I put between the cracks of rough brick, shimmer out of the diffuse darkred of the wall.

With the words "es de buena famiglia" Canetti cites his mother who came from an old, wealthy, Sephardic family. All her life she looked down at the also Sephardic, but nouveau riche family of her husband. With this example he shows what an important role social differentiation plays – even within a small group like the "spaniolic" Jews of Russe – and how this mechanisms influences wether someone will be accepted or excluded. "Integration" is one of the hottest topics in political discussions at present.

I have completed my work by "reconstructions" on the historic balcony balustrade of the house, made of laminated paper. They provide a connection between the interior room and the memorial of a Bulgarian national hero standing down the street who just raises his gun to shoot.