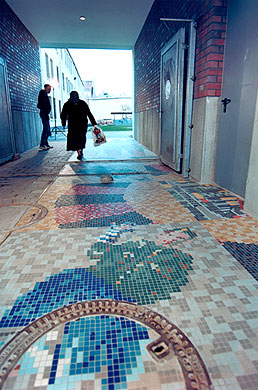 The new building stands on a site that had been very densely built-up for nearly 100 years. By the mid-sixties, all that was left of this once lively quarter were two solitary courtyard buildings.

I developed the idea of a floor mosaic that would highlight the site from a historical and an archaeological perspective. Like the accidentally found remains of an old floor or carpet, it indicates the presence of former rooms that might once have stood beneath the new building. The passage leading from the street to the inner yard seemed the most suitable location for my work.

In formal terms, both sections of mosaic are laid out like board games, alluding to the St. Pauli district as a terrain for military and social interaction and interests. The mosaic’s motifs make direct reference to the site’s history. The figures in the front section, sailors and policemen, stand for the opposing poles that for a long time shaped life in this quarter. State authority at one extreme, uninhibited and open-minded freedom at the other. The central area of the floor is based on a map from 1946 showing the extent of the damage inflicted on this district during the war. The motifs in the rear section of the floor describe the site’s historical development. They range from meadows and pastureland as still existed in the early 19th century to the construction of a motorway access road in the 1960s. The chequerboard rows of alternating red-and-white and black-and-white points facing one another are a reminder that this site was once located directly on the German-Danish border.