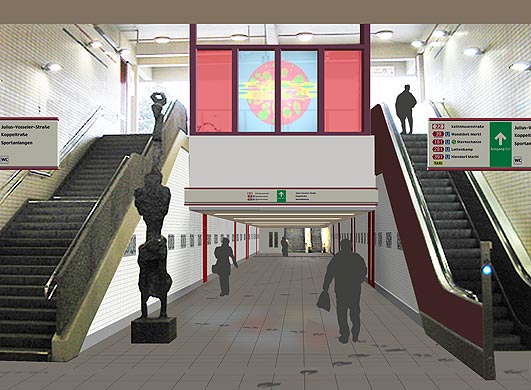 Design submitted for a competition for an artistic refurbishment, 2nd competition, 2007

Preamble
Three design elements have been incorporated in my proposal: the floor with its design is conceived as a common, continuous level between the different sections of the station; the key colour accent is set by the glass window work; the decorative frieze gives spatial definition to the long underpass.

Hall
On entering the hall from the platform, one’s gaze is drawn first to the brightly lit window façade between the two upper-floor exits. This light situation would be ideal for installing glass works. During the day, light shines in through these windows, while after dark the building is lit up from the inside with coloured light. Set high up, the coloured windows exude a somewhat religious aura, contrasting with the building’s sober architecture.

The competition prescribes the involvement of a Japanese artist. I thus propose collaborating with Kengo Nakamura from Tokyo to design the windows. In his work he frequently plays with signs from his everyday surroundings, such as pictograms in Tokyo’s underground railway or outlines of figures from manga comics, which he re-assembles into new structures.

Floor
Animal tracks along the floor. The idea is based on the station as a point of departure and a metaphor for mobility. Originally, the migrations made by animals governed human mobility; today, mankind restricts animals’ freedom of movement. The animal tracks do not follow the form of the station building. They are executed in dark stone sunk into the existing floor (artificial stone).

Underpass
The underpass is given formal definition through a series of panels set in a consistently straight line along the walls. The panels’ proportions correspond to the size of the tiles lining the walls. The concrete panels lend the passage a regular rhythm and, similar to a tape measure, mark its length and uniformity. In thematic terms, the wall works amplify the subject of mobility indicated in the floor tiles. As a metaphor for the reduced radius of movement enjoyed by animals in the current world, their bodies are bereft of extremities; they have been yoked into the human system of control. Each panel has been designed with a different animal motif and executed in the same manner and material as the floor panels: cast in artificial stone with darker inlays in concrete, then polished and sealed.